Cairn Energy PLC (“Cairn Energy”) is one of Europe’s leading independent oil and gas exploration and development companies and its dispute with the Indian government has recently been making headlines here in India as well as across the globe.

In this article, we would like a recap of the case and the order given as well as answer questions such as – What is the Cairn Energy-Indian government dispute all about? What did the Permanent Court of Arbitration say in its ruling? What are Bilateral Investment Treaties (“BIT”)?

The dispute is predominantly a tax dispute and can easily be linked to the prominent Vodafone and Indian government tax case, which, simply put, resulted in the Indian government introducing the Finance Act, 2012 which amended the Income-tax Act, 1961 retrospectively.

The Cairn Energy case revolves around capital gains tax on a restructured company (Cairn India) sold close to a decade ago. Cairn UK Holdings Limited (a subsidiary of Cairn Energy), is the parent company of Cairn India. Cairn Energy restructured its operations in India and transferred ownership of its Mangala oil field in Rajasthan to Cairn India. As part of this restructuring, Cairn India acquired the entire share capital of Cairn India from Cairn UK Holdings. The company argued this was a business reorganisation with no tax motive driving it, but the Indian Tax Department saw it very differently. Thereafter, in 2011, Cairn Energy sold most of its holding in Cairn India to Vedanta Resources for $8.7 billion. However, the Income-tax authorities barred it from selling about 10 per cent, citing pending taxation issues. The Income-tax authorities subsequently sold the majority of this shareholding and received the proceeds and dividend payments.

In 2014, Cairn Energy was presented with a USD 1.4bn claim from the Income-tax authorities for unpaid taxes resulting from the intra-group share transfers undertaken in 2006 in preparation for the IPO. Consequently, Cairn Energy commenced arbitration proceedings against the Indian government under the UK-India Bilateral Investment Treaty (BIT). In December 2020, a three-member tribunal at the Permanent Court of Arbitration, Hague ruled against India in this long-running tax dispute.

In the illustration below, we have set forth the timeline of the Cairn Energy case as it stands: 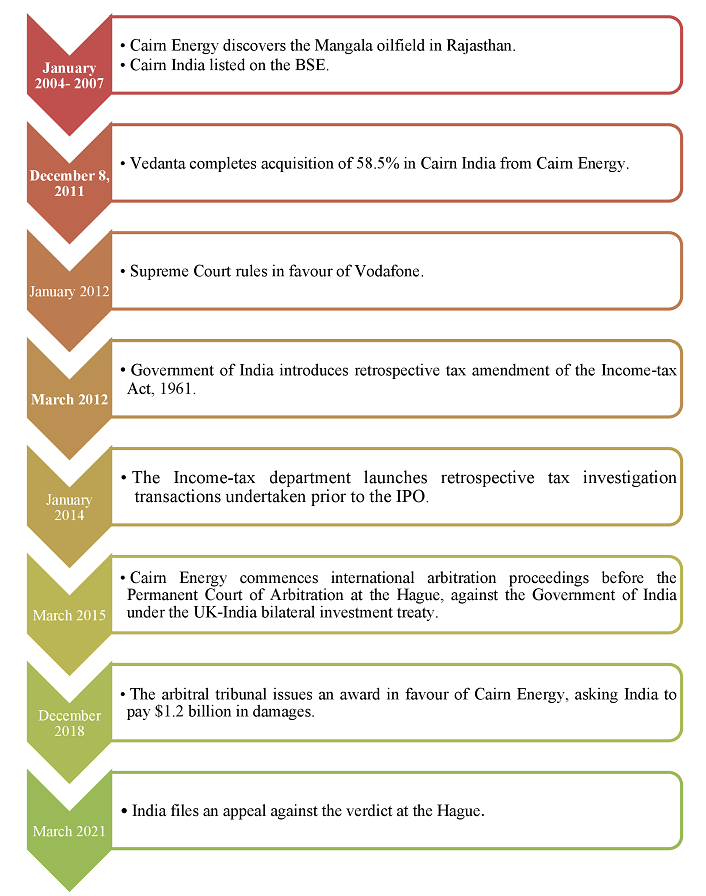 BITs are agreements made between the governments of two countries or states to promote reciprocal foreign investment between those states. BITs typically require the signatory states to give fair and equitable treatment to foreign investors and make a commitment to ensuring that foreign investors are treated by each state the same as their own nationals. BITs have a very broad application and usually cover most foreign investments as long as the investor has contracted with a foreign government (directly or indirectly). Where a country fails to comply with the provisions affording protection to foreign investors, affected investors have a right to arbitrate directly against the defaulting state for breach of its obligations under international law. BIT arbitrations are not particularly common but when they do occur, they typically generate noteworthy arbitral awards.

The BIT between the UK and India is an agreement “for the Promotion and Protection of Investments”. Signed in 1994, the purpose of the agreement is generally to “create conditions favourable for fostering greater investment by investors of one State in the territory of the Other State”. Article 3 concerns the “Promotion and Protection of Investment” and seeks to encourage foreign investment by promising fair and equitable treatment. Article 4 deals with “National Treatment and Most-Favoured Nation Treatment” and seeks to ensure that foreign investors will not be treated any less favourably than local investors. These types of clauses are fairly typical of BITs and do not apply exclusively to the agreement between the UK and India.

In light of this India-UK BIT, Cairn Energy claimed that the Indian Government’s retrospective amendment of the tax legislation violated the protection awarded to Cairn under the UK-India BIT – namely, the right to fair and equitable treatment. This prompted Cairn Energy to approach the Permanent Court of Arbitration at the Hague.

The arbitral panel unanimously determined that the Indian Government had breached the terms of the UK-India BIT and directed the Indian government to pay Cairn Energy a hefty sum of US$ 1.2 billion in pecuniary damages, together with interest and costs.

India has, since the pronouncement of the arbitration award, not only vociferously opposed the same but has also proceeded with filing an appeal against the award in March 2021. The appeal against the verdict has been raised on grounds of sovereignty and tax avoidance by Cairn Energy. The Indian government’s stance is that the government has the sovereign right to tax, and private individuals cannot decide on that. Furthermore, it is of the opinion that tax matters fall outside the domain of a BIT and beyond the jurisdiction of international arbitration. The Indian government is also relying on the fact that Cairn Energy did not pay tax in any jurisdiction across the globe. India has contested the Permanent Court of Arbitration’s claim that the Cairn Energy case is not a tax dispute but a tax-related investment one, and hence, it falls under the court’s jurisdiction.

Since the conclusion of the arbitral proceedings, India and Cairn Energy have been going back and forth on different proposals aimed at settling this dispute. Cairn Energy offered to invest the entire financial award in India, providing that the government concedes on and withdraws the appeal it filed. India, in response, rebuffed the proposal. India also proposed to Cairn Energy that they settle the dispute by paying 50% of the disputed principal tax amount and get a waiver of interest and penalty2().

In the interim period, prior to the filing of the appeal, Cairn Energy has as a first step, also registered in the US, the UK, Canada, France, Singapore, the Netherlands and some other jurisdictions, the arbitration award it won against India, before it can petition court to enforce the award against Indian assets overseas. Courts in five of these countries, including the United States and the United Kingdom, have given recognition to the arbitration award, thereby opening up the possibility of Cairn Energy seizing Indian assets in these countries if it does not pay the amount. These confirmations came in just days before India filed its appeal against the arbitration order.

In the event that India loses this appeal, Cairn Energy’s best option is to seek enforcement of the award in other jurisdictions where the Indian Government has assets. Cairn Energy which has stated that it is confident of its position has already stated that it is looking to identify assets owned (directly or indirectly) by the Indian Government, in order to seize them in the event that India does not honour its obligations.