Follow us on
SEARCH FOR A SPECIFIC TOPIC
Home Intellectual Property Copyright Is your origi...

One of the first questions that comes to the mind of an artist or a creator, as soon as a work is created, is how can the work be protected. Is protection available only if the work is “registered”, or does protection follow automatically from the time of its creation? The issue of whether copyright registration is compulsory or not is a long standing one; and due to various conflicting judgements in India, artists and creators have always been uncertain about this matter. Under Indian law, copyright comes into existence as soon as a work is created and no formality needs to be completed for acquiring copyright. However, a certificate of registration of copyright serves as prima facie evidence in a court in a dispute on copyright ownership. Despite what the statute contains, Indian courts have not always provided reliefs where copyright registration was not produced by the owners.

The statutory position on copyright registration

No provision in the Act states that registration of copyright is mandatory in India. Neither Section 13(1), which deals with the subsistence of copyright nor Section 17, which deals with the ownership of copyright lists registration as a pre-condition for claiming copyright in a copyrightable work. Further, the use of the expression “may” in Sections 44 and 45 (pertaining to the Register of Copyright) makes it abundantly clear that registration of the particulars pertaining to a copyrighted work is optional. Lastly, in terms of Section 48, the Register of Copyright only serves as a prima facie evidence of the particulars entered therein.

Interestingly, India being the signatory to the Berne Convention for the Protection of Literary and Artistic Works, 1886 (Berne Convention), is under an obligation to give equal protection to the works originating in any of the contracting states, as they would grant to the works of its own nationals. Under Article 5(2) of the Berne Convention, it is mandatory that the enjoyment and the exercise of the rights shall not be subject to any formality, and such enjoyment and such exercise shall be independent of the existence of protection in the country of origin of the work. Additionally, India is also a signatory to the Agreement on Trade-related aspects of Intellectual Property Rights (TRIPS), which requires all member states to comply with Article 5(2) of the Berne Convention.

Until recently, the primary case that discussed the issue of the requirement of copyright was Dhiraj Dharamdas Dewani v. Sonal Info Systems Pvt. Ltd.1  Here, the Bombay High Court had held that in order to invoke the civil and criminal remedies under Section 51 of the Copyright Act, the owner of a copyright must have a valid copyright registration. The Court also observed that an infringer cannot be expected to know about copyright existing over any work unless it is registered and published in the Official Gazette. The decision was later challenged in the Supreme Court, but was dismissed stating that there is no error in the order passed by the High Court. The Supreme Court decided to leave this important question of law open, which has led to contradictory judgements by various High Courts.

The Bombay High Court has recently taken a new position on this issue in its decision in  Sanjay Soya v. Narayani Trading.2  In March 2021, the High Court held that the earlier decision of a co-ordinate bench in Dhiraj Dharamdas Dewani (supra) was per incuriam. The Court ruled that copyright registration is not necessary for obtaining relief in an infringement suit. The single judge bench of Justice GS Patel of the Bombay High Court, observed that the Copyright Act gives a range of rights and privileges to the first owner of copyright without requiring prior registration, and held that registration of copyright is not mandatory under the Copyright Act for seeking an injunction against infringement. The Judge emphasized that Section 51, which speaks of infringement, does not restrict itself to works that have been registered with the Registrar of Copyright. 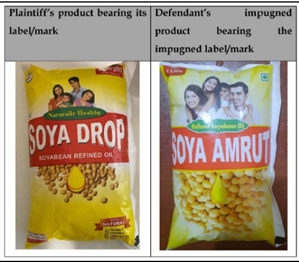 The plaintiff asserted trademark infringement, for which the Court ruled that the defendant’s label is deceptively similar and is likely to cause confusion. It also held that this was a case of passing off as the defendant has dishonesty adopted the impugned mark to encash on the Plaintiff’s goodwill and reputation.

The Plaintiff also asserted copyright infringement, for which the defendant resisted and relied on the Dhiraj Dewani decision stating that the plaintiff’s assertion of copyright on the package label was not valid since it was unregistered. The Court disagreed, holding that, “Section 51, pertaining to infringement of copyright, does not restrict itself to works that have been registered with the Registrar of Copyright.”

Firstly, the judge said that the older case had incorrectly equated the trademark and the copyright regimes. The Court held that in the case of trademarks, registration under the Trademarks Act, 1999, is compulsory, while this is not true for copyright infringement. The Court pointed out that as per Section 45 of the Copyright Act, copyright in any work “may” be registered. The Court further delved into the legislative intent of the Copyright Act, and drew upon the Joint Parliamentary Committee report associated with the Bill. The Court noted that, as per the report,  the proposal to make registration mandatory under the Copyright Bill 1955 was dropped as the committee thought it would create an undue restriction in the exercise of rights.

Secondly, the single judge also disagreed with the view in Dhiraj Dewani regarding the nature of the right itself. The Court held that copyright and trademarks operate in different spheres, although occasionally, as in the present case, they may overlap or intersect: an artistic work may receive both trade mark registration as a label and copyright protection as an artistic work. However, while one (trademark) requires registration to sustain a suit for infringement, the other does not.

The Court noted that in its essence, copyright is a recognition of originality, where rights of commercialisation and exclusivity in that commercialisation are granted to the author of a work. The author is the person who has brought into being the original expression or realisation of an idea. The emphasis is on originality, labour and skill in expression and realisation. The Court said that the author of a work might be cast into a state of wonderment on completing his or her work as to whether or not his or her work was indeed original or was an infringement of someone else’s copyright. Accordingly, the Court said that copyright registration was not mandatory.

The Court held that the precedent laid down in Dhiraj Dewani is conceptually and logically plainly wrong. The Court ruled that every forger, plagiarist or, to use a more colloquial expression, ‘rip-off artist’, knows what they are doing, i.e., forging, plagiarising or ‘ripping off’ another’s original work, even as they go about doing it.

Thirdly, the Court discussed whether the requirement of specific jurisdiction under Section 62 of the Copyright Act to sue a defendant in a court where the plaintiff is situated is available only to registered copyright owners. The Court held that the owner of a copyright has a panoply of jurisdictional choices, including one that is available only to copyright owners (and not to an ordinary plaintiff in a regular civil suit). The question, therefore, is not of which court, but more properly, of what relief the plaintiff is entitled to.

This clearly–phrased and well-reasoned decision of the single judge bench of the Bombay High Court granted an interim injunction in favour of the Plaintiff.  This decision clarified the position regarding the legislative intent behind copyright law, and India’s obligations under the Berne Convention and TRIPS, which were missing in jurisprudence before this. This decision is also likely to  give major relief to copyright owners who were earlier hesitant to take action against infringers for reasons of not having obtained copyright registration.